My Baby Domino-Love at 1st Sight 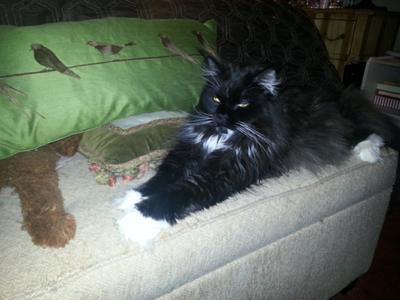 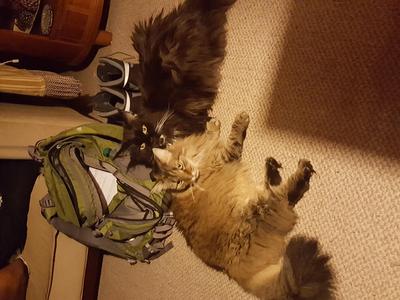 Domino, my 14.5 year old male Maine Coon lost his fight against cancer in December 2019. He was my heart and the highlight of our cat family. I adopted Domino when he was just a baby. The anticipation of Domino arriving after his 16th week birthday was almost unbearable. After I was sent his picture, it was love at first sight! I wanted to get him here as soon as possible but had to wait the customary waiting period.

When I picked him up from the airport, the guys working there told me, "that's a handsome little guy you got there." And when I finally saw him in person, through his carrier door, I most heartily agreed. He was even more handsome than I expected. He looked at me through his cage door with those big beautiful golden eyes like he knew I was there to take him home. He was a fast learner and was an impeccable litterbox user--he was that way for the rest of his life.

Domino grew to be a magnificent looking, striking tuxedo adult Maine Coon. He always received the attention he sought from everyone in the house--my husband, my son, and of course, me. Domino would talk to us in a baby goat voice. It was the sweetest sound I had ever heard. I have no idea where he picked up that sound--none of my other cats could replicate it. He would baahahaah at us when he didn't get his food fast enough (he was very greedy), brush him long enough, play with him long enough, pay attention to him, etc. We LOVED it!

Domino's fur was silky black and gorgeous but I had to get Domino shaved at least once a year because his fur would mat easily. This tail was outstanding--longer than his long, rectangular body. The plumage/fur on his tail was magnificent. He would get the lion cut and I think he loved it, as did I. He was such a good patient that he could be shaved without being put to sleep. The assistants at his vet would fight over who would care for him--they adored him and especially his ears.

Although Domino is no longer with us, he will always remain in our hearts because he WAS our heart. My sweet MC mix, Deva loved Domino, she was his girlfriend. Deva will still, occasionally, go from room to room looking for him and just cries in the hallway when, alas, again she doesn't find him. They adored each other. When I brought 12-week old Deva home 9 years ago from PetSmart, I was hoping my cats would accept her. Domino was already full grown and HUGE and I had to watch him closely. When I sat Deva on my bed, Domino jumped on it beside her and proceeded to lick her for the next 15 minutes--and she didn't move or cry or reject him. They loved each other from the very start.

I could go on talking about my Domino forever. Don't get me wrong, I love all my cats dearly, they mean the world to me, but it really hurts when they're no longer around to put you to work or to baahahaah or meow or to climb in my lap.

That's my story about my dearest Domino. Enjoy his pics!

Join in and write your own page! It's easy to do. How? Simply click here to return to Where Are They Meow? (SMMC Kittens).

Where Are They Meow?